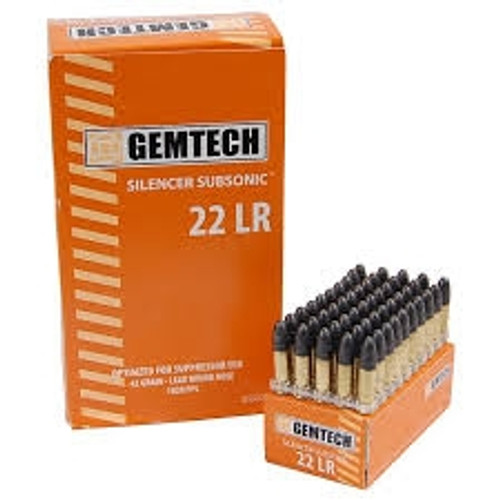 After years of recommending various brands and types of ammunition, Gemtech decided to do things right and create their own optimized round for suppressor usage. Putting together a heavier bullet, a cleaner powder, a premium lube on the lead round nose projectile gave us consistent velocities and harder hitting performance at subsonic, suppressor-friendly speed. The 42 grain lead round nose bullet is heavier than traditionally available rounds, but isn't so heavy as to cause instability. While "harder hitting" and ."22lr" aren't usually associated together, steel silhouette shooters will appreciate the difference between a knockdown and a wobbling target that stays up! A designed velocity of 1020 feet per second ensures the heavier projectile remains subsonic speed in most all firearms without resorting to anemic velocities. Testing indicates that the ballistic coefficient for the 42gr GEMTECH bullet is approximately .125.