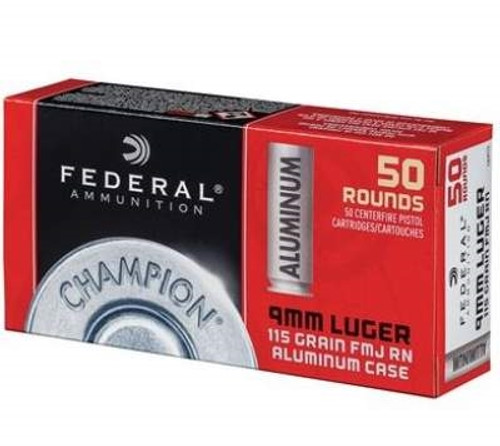 Federal Champion 9mm Luger Ammo 115 Grain Full Metal Jacket ammo review offers the following information; For nearly a century Federal Ammunition has put its focus on manufacturing quality products with cutting edge technology. This dedication to excellence has given Federal a competitive edge as an ammunition technology giant. Today the company is well known for producing high-grade centerfire, rimfire, and shotshell ammunition that shooters everywhere know and trust. The Champion line of ammunition is Federal's least expensive range and training loads. Still designed with the same standards as any of the Federal ammunition, the Champion line includes extremely affordable brass cased ammo while delivering match quality performance that all shooters have come to expect with the Federal name. This Federal Champion 9mm Luger is loaded with a 115 grain Full Metal Jacket copper plated bullet, meaning it’s thinner than the traditional jacket, and is closed on the bottom side. Designed for the competition shooter, the Full Metal Jacket match bullet creates an accurate and reliable round that loads quickly to get back on target. Completely enclosed in copper, not allowing for any lead to be exposed, makes this Champion round a winner at the indoor ranges. Federal Champion 9mm Luger is non-corrosive, new production ammunition in boxer primer and non-reloadable aluminum cases.